Canadians Best is reader supported. Purchasing via our affiliate links may earn us a commission. Learn more here. 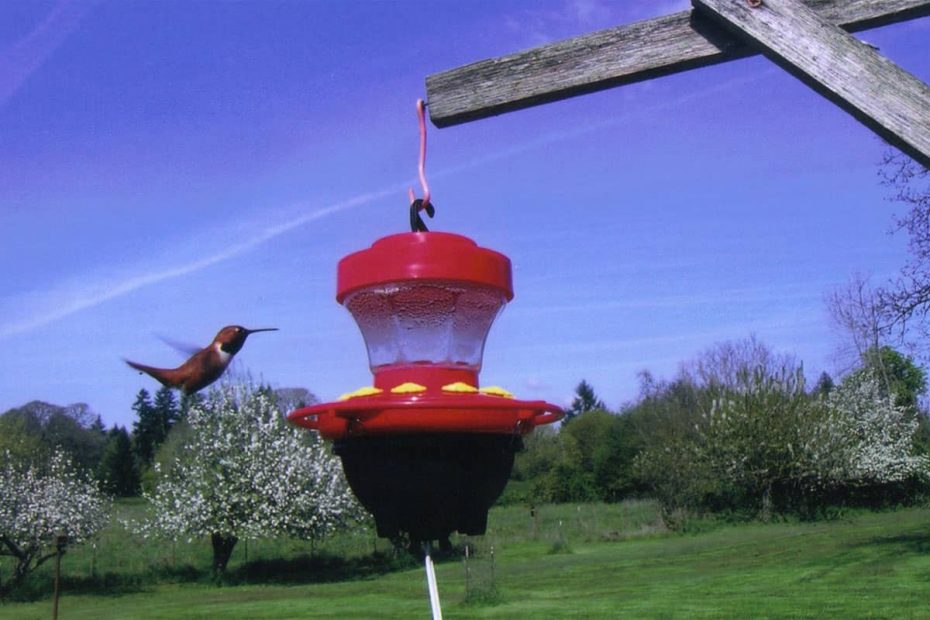 One of the most crucial things during winter, in regards to attracting your favorite bird (of course its the hummingbird), is to prevent their oh so special Nectar from freezing over.

This is not a simple task for many reasons, primarily the temperature, but also the texture and substance of Nectar is quite difficult to stop solidification, even in fairly mild cold.

Thanks to companies like Hummer Hearth to name one, there are now heaters specifically designed to attach to hummingbird feeders, which heats the food above.

In the case of Nectar, it will make sure it is liquified and easily obtained, just like it would be in summer months. Genius. 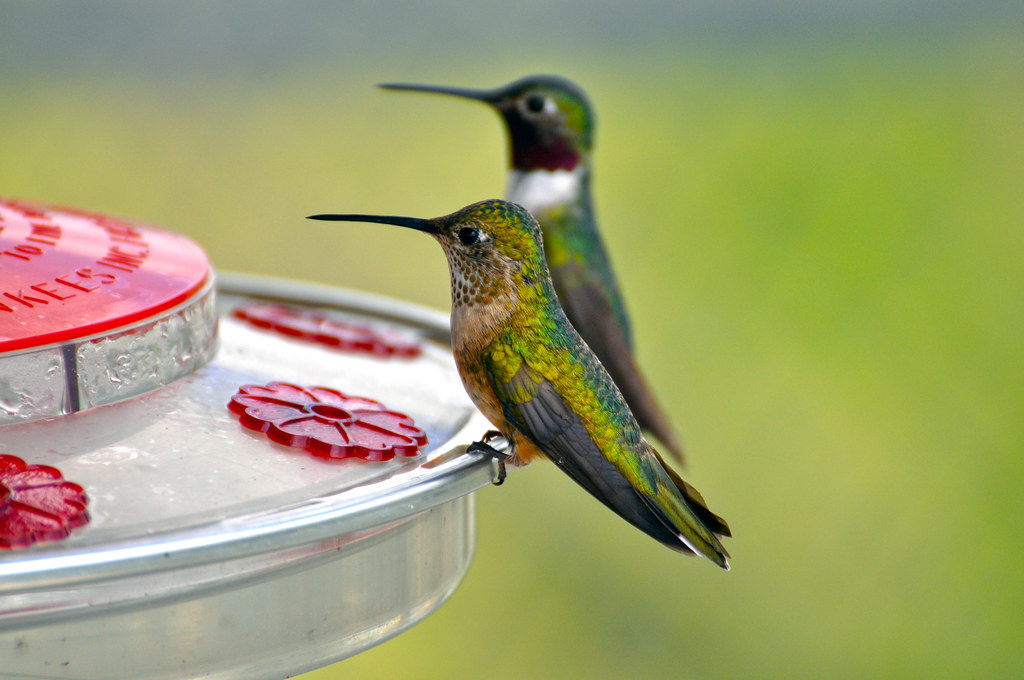 The first thing to note that the feeder doesn’t actually come with the heater, its sold separately.

Luckily enough, the heater is very versatile and is compatible with the majority of bird feeders designed for hummingbirds, due to the hoot style attachment.

The hooks can bend and move, allowing them to fit narrow or wide base feeders alike.

The internal bulb, that is a single 7-watt bulb, will keep small to mid-size feeders thawed out at 15 degrees Fahrenheit, and that is with a single bulb. Energy-saving at its best with such a low wattage, however, if you have a larger size feeder, which most probably won’t have, you can use a stronger bulb if necessary.

It simply latches on to the rim of the feeder and heats from underneath, as heat naturally rises, it works twice as fast to heat the food above, thawing it out and keeping it at a drinkable level for the duration of its operation.

With such a low cost with a 7 watt bulb, you can probably afford to leave it on for the whole winter without too much concern.

How does a Hummingbird Feeder Heater Work?

A simple device made of small compartments, as shown in the picture below. It latches onto all sizes of Hummingbird feeders with its variable grips. Then the internal bulb that operates on a low wattage will heat the Nectar above, allowing them to drink as they would during summer months. Always remember the feeder is not included, so if you already have one, you can fit this right on, while hanging from your bird feeder pole. 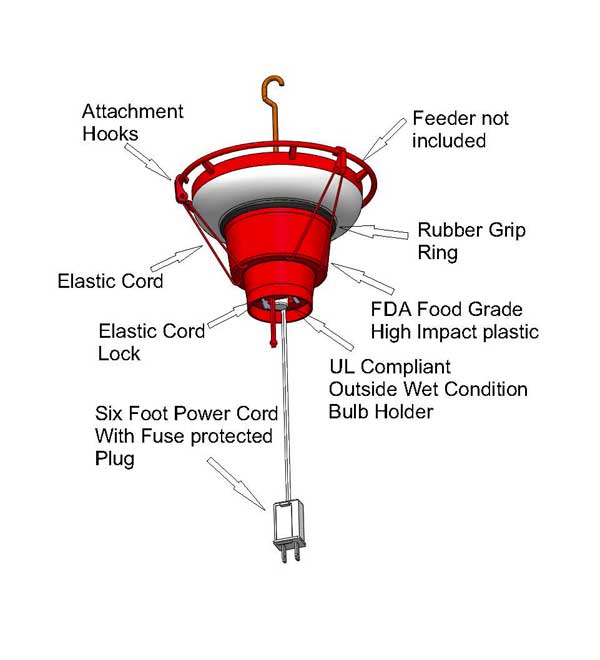 How Do Hummingbirds Usually Survive in Winter?

When a winter hummingbird is observed, the first concern of most birdwatchers is why such a small bird takes such a risk in an inhospitable environment and furthermore, how on earth can they survive.

There are several reasons why these animals can still remain in environments like this, where the cold is violent, even if you are not a year-round resident in an area of cold weather.

Among the reasons that exist, is that a hummingbird can be an early or late migrant who seeks a spring advantage by claiming territory to attract a couple, or wasting time in their autumn migration.

In either case, an early or late season storm can get caught in winter areas because hummingbirds don’t have enough experience in migration. 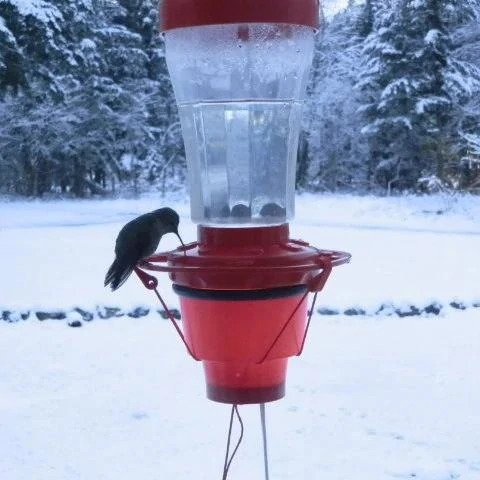 Any hummingbird of age can be the victim of storms or other factors that move it away from the road, and get in the way of winter.

The survival of hummingbirds can be uncertain, however, hummingbirds can easily enter lethargy on cold nights, allowing them to save energy to survive lower temperatures when food is not so readily available.

In all of the cases, the hummingbirds are pretty similar to the other birds.

They will also change their diets in the winter to eat more insects, this in view of the fact that in those times the nectar flowers are not available.

What do Hummingbirds Eat in the Winter?

Flowers with early and late flowering cycles, as these provide natural nectar available that lasts about several months.

The best you can do so that hummingbirds can maintain the temperature of their food: 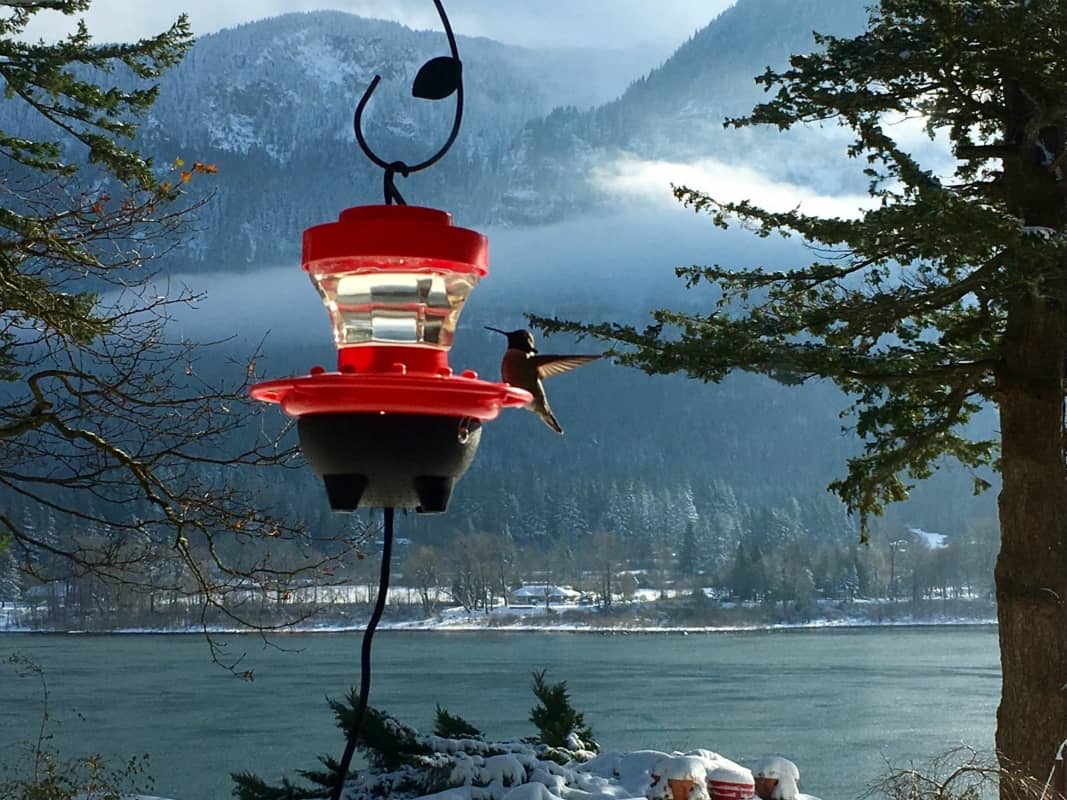 What are the Advantages of using a Heated Feeder?

The best investment you can make today, as an observer and protector of these wonderful creatures, is in the hot bird room, which will not only allow you to observe and care for them more frequently. But it contributes to its preservation and existence in it.

Tips for Feeding Wintering Hummingbirds and other Winter Birds

Don’t use only one type of bird feeder

Birds have different preferences when feeding, and also according to the species, it feeds in a different way. Open dining rooms with trays will attract a wide variety of birds, but the more different forms of the feeder you put the more birds you will attract.

For example, to attract goldfinches (another type of bird) you can put on a mesh sock, nectar for hummingbirds, tallow for woodpeckers and jelly for orioles.

Do not leave the feeders empty

If you leave the feeders empty, you will not miss bird visits, but they will be constantly empty, they will not visit you again. Put food and you will attract a wide variety of wild birds.

Don’t Use Alpiste of poor quality

Poor quality birdseed blends make corn, millet or wheat crack. Birds often throw it on the ground instead of eating it.

Do not feed the birds with bread

Bread, although it may contain seeds, are foods such as donuts, cookies, and cereals, which do not provide any kind of nutritional value to mature or small birds. They may bite from time to time with that type of food but not as usual.

Remember that feeding the birds does not always mean putting bird fish in the feeders.

They also love the fruits of the trees or the nectar that produce the flowers of our garden, or the insects that, in addition to being very nutritious for them, do us a great favor to eat them.

Feed the birds in winter

You may think that since you don’t see birds during the winter, you don’t need to feed them, but they need even more than in spring and summer because food is scarce more and they will be happier if you provide them.

There are many wild animals that could be fed before birds do. Deer, squirrels, rats, even bears. At the same time, the feeders that leave the bird unprotected can cause them to be exposed to their predators while they eat.

It is a mistake to think that wild birds are not demanding with the cleanliness of their feeders. A dirty feeder can become clogged and moisture can spoil the food and cause diseases that can spread to other birds.

Be careful when storing seeds

The birdseed can last long in good condition but as long as it is stored properly. If you don’t protect it, mice or moths may invade you. Over time, the seeds dry out and are less nutritious for birds.

What Species of Hummingbird can I see in Winter?

Depending on what part of the world you are in, the months and dates can vary. For example, if you are in the south you will probably be used to a short winter than northerners, where the winters are colder and longer. Areas, where hummingbirds frequent in summer months, will have winter visitors as early as October, all the way through till March.

Here are some species you may find during the winter months:

The Buff-Bellied hummingbird is a 4 season hummingbird that originates from Texas, but will cover areas as far as Mississippi during winter months, on the outlook for food.

Another is the Ruby-Throated hummingbird which is probably the most visible of the bunch, can be easily seen during the summer in eastern states. During winter however, they will tend to take solace in Florida but have been known to push north if the weather permits.

One that can be found on the western side and southern, is the Costa hummingbird. Known to flock as far as Western Mexico during the winter, and more locally in California. The Anna hummingbird also reaches Mexico in the winter, but more of the northern area when compared to the Costa. The Anna also frequents Baja off the Pacific coast, Vancouver and areas of British Columbia.

The Rufous hummingbird also enters central Mexico, but rarely crossing paths with the Costa or Anna during winter periods. A healthy breed that is increasing in numbers and can be also seen in the southeastern states. The last one to look out for is the Broad-Billed hummingbird which is primarily from the west, southwest to be precise. During winter it will fly to areas like Arizona and other neighboring cities. 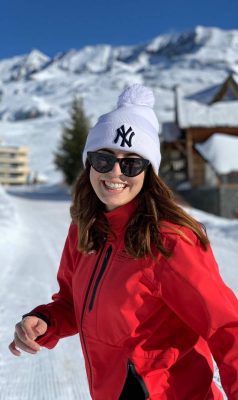 Emma is our resident research specialist and pro content creator. She has been blogging for many years now and has been reviewing and testing products with us here since day 1. She specialises in beauty, health, home and kitchen related products. As her passion in these fields results in a good eye for spotting the latest top products, and also a critical testing process, you can be sure of her recommendations and honest reviews. 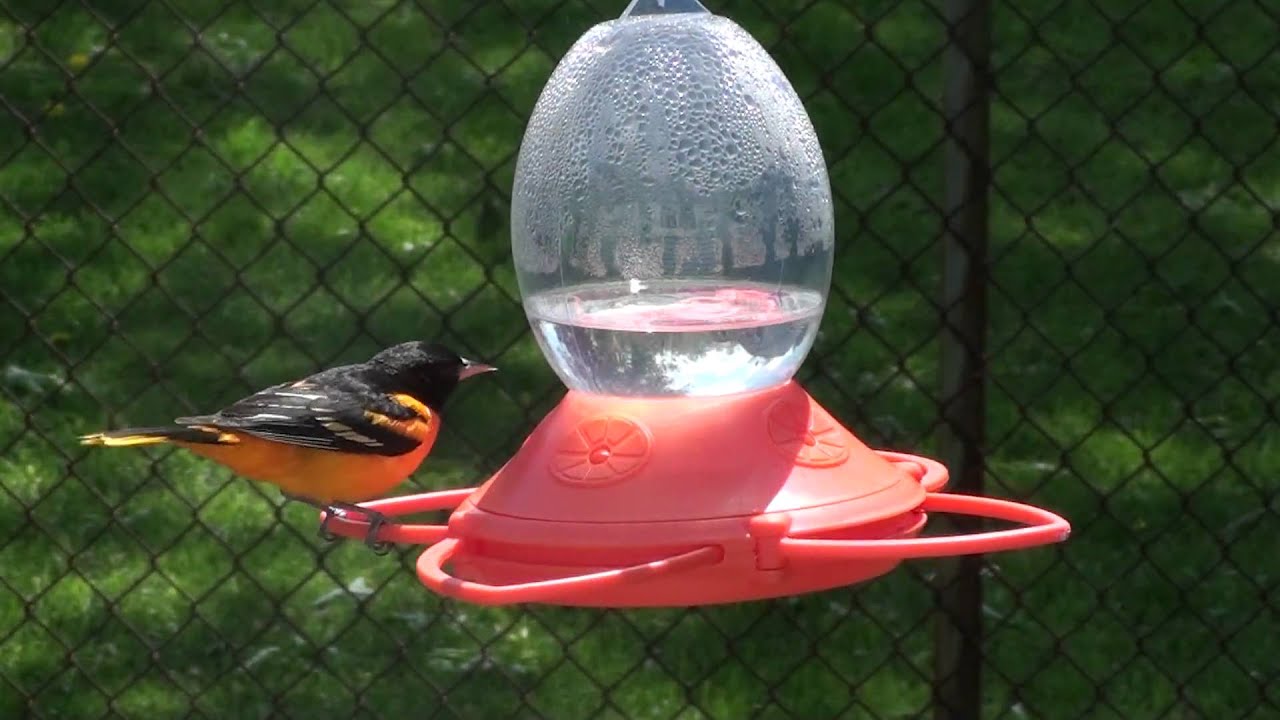 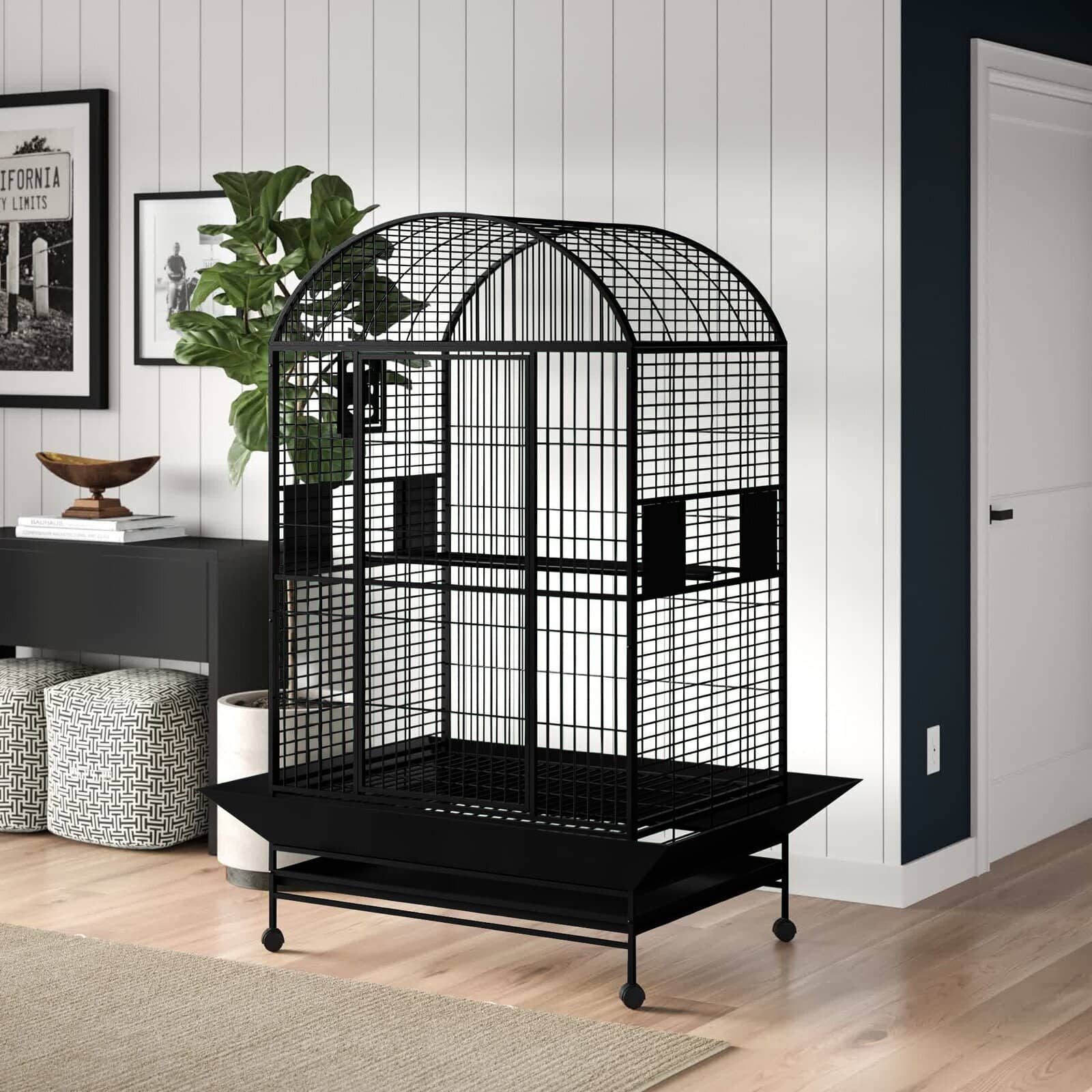 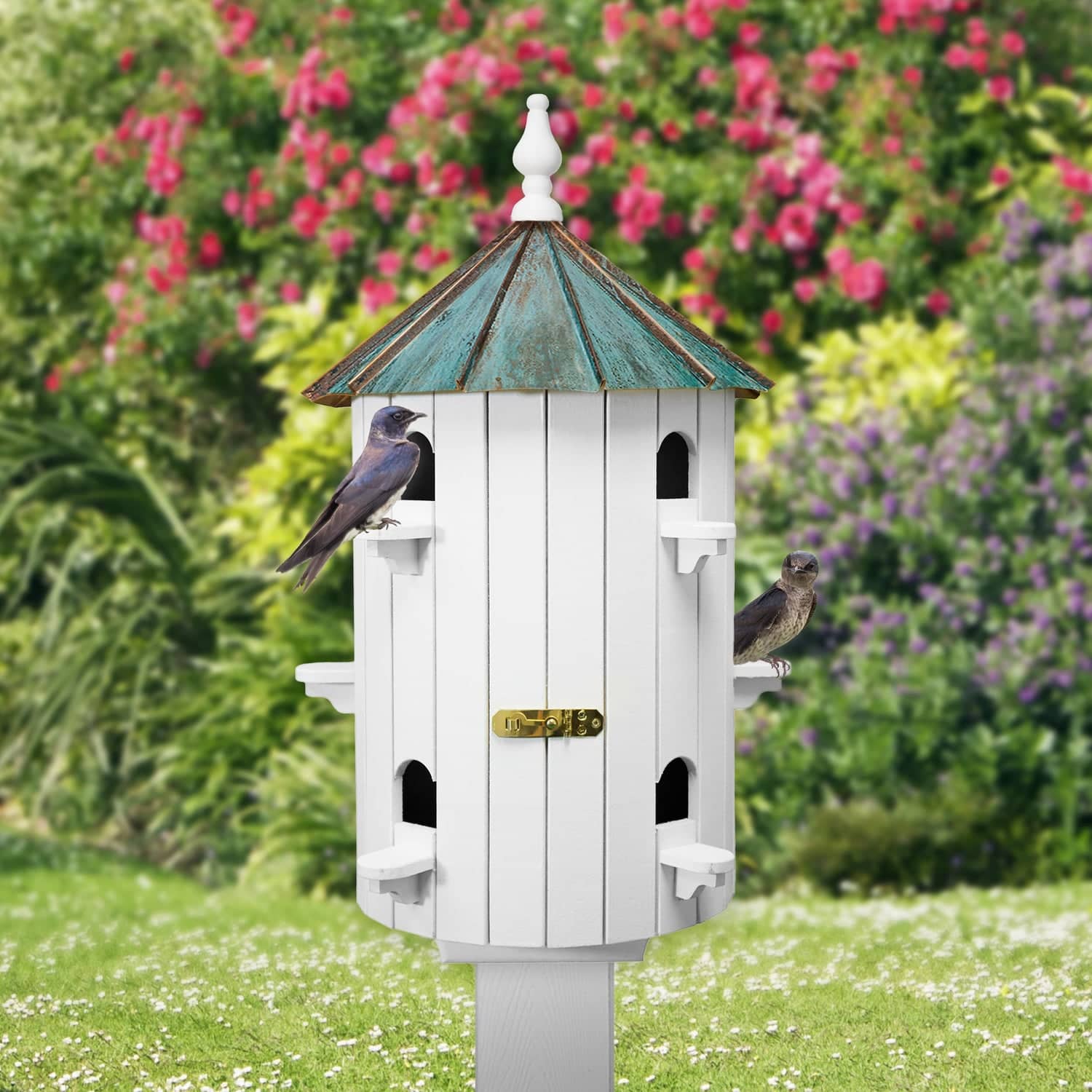